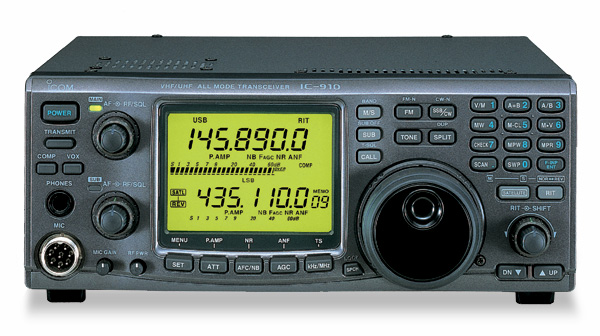 The IC910H is a popular radio used by many VHF/UHF operators. It offers 100w output on 144, 75w on 432 and an optional module to add 10w on 1296 MHz. It can also receive on one band while transmitting on another. This feature is needed when communicating via amateur satellites.

While interstate contacts are routinely made on the HF bands, many people enjoy making long-distance contacts on VHF/UHF SSB. Even with fairly low power, the use of SSB allows longer distance contacts than is the norm with FM and repeater operation. The amateur six metre (50 MHz) band sometimes provides intercontinental communication, while enhanced conditions on the higher bands (particularly during the summer) allows distances of thousands of kilometres to be covered.

VHF/UHF operators often specialise in particular propagation modes. Some use meteor ionisation trails to reflect signals back to earth. The VHF dx operators located along frequently used aircraft paths can bounce their signals off aircraft. When the aircraft is located roughly midway between stations 400 to 700 km apart the aircraft is sufficiently reflective to increase the signal levels on 144, 432, 1296 and higher frequencies. Operators in the Sydney and Canberra areas use this technique to make contacts with stations in the Melbourne area most days of the year. The time from approx 7am to 9am each morning is the most common time for this activity, due to frequent flights and a peak in operator availability at the start of the day.

Some operators build massive antennas with arrays of up to several dozen antennas to bounce signals off the moon to communicate worldwide. Because signals are very weak, morse code (CW) is more effective than SSB for this mode.

An advantage of VHF/UHF is the large amount of gain obtainable from relatively small antennas. Operation from hill-tops, with portable equipment is another attraction of VHF/UHF SSB operation. The WIA holds several contests in the spring and summer to encourage this type of operating. More information about VHF SSB operation can be obtained from the website of the VK2 VHF DX Group and from the VK-VHF mailing list. 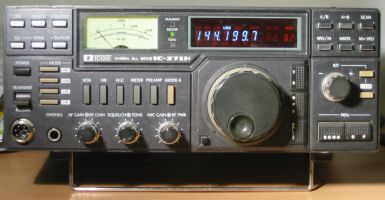 With transmitter output of 100w on the 144-148 MHz band, this SSB/CW/FM radio has a good receiver and a transmitter quality that makes it an ideal radio for VHF dx work on 2m. The later version of this radio is the IC275H. Both are well respected by VHF ssb/cw operators, even though later models have more features.

In practice nature is not so cooperative with this theory and the cutover point varies hour by hour, day by day and year by year. There is at any time a changeover frequency, usually between 10 and 100 MHz, depending on the point in the sunspot cycle and the current actual sunspot activity, at which ionospheric reflection via the upper layers (usually F layer) ceases to operate and signals at frequencies higher than that level are not reflected, while frequencies lower than that level continue to be reflected. This is probably not a precise definition of the maximum usable frequency (MUF) but this illustrates the concept well enough.

The E layer of the ionosphere also occasionally contains clouds of ionised particles that do reflect radio signals and this effect can be observed at frequencies of between 25 and 60 MHz every year, with occasional extensions above 100 MHz. In the Australian summer of 2006/7, sporadic E layer ionisation on several days of November and December 2006 supported many radio contacts on the 144 MHz band, with distances of well over the usual workable distances. Contacts were made between southern, northern and western Australia over distance of over 2000 km.

The E layer also is involved in a propagation mode called Trans-Equatorial Propagation (TEP). Articles giving more details of this kind of propagation are:

So what distances can I reach using ordinary VHF or UHF propagation?

The VHF bands are often regarded as "line of sight" bands with little opportunity to make contacts over the horizon. In fact contacts are readily made well over the line of sight distance on bands up to 1296. As the frequency gets higher, atmospheric losses increase. But on 144 MHz distances of 500 km are common, with well equipped stations at both ends, using high gain antennas. Typical station equipment would be:

The more serious operators would use 400 watt transmitters and either a single long yagi of up to 14 or 16 elements (on a boom of up to 6 to 8 metres length) or an array of 10 or 12 element yagis (each having boom length of about 4 metres).

An array of four high gain antennas combined with a good quality receiver preamplifier would enable a 400 watt station to use moonbounce techniques to make overseas contacts, depending on the station at the other end. Two similar stations would be unable to make voice or CW contacts via moonbounce on 144, but would be able to make moonbounce contacts using digital modes.

On 432 MHz similar transmitter power levels are used, but antennas can be of much higher gain because the wavelength is correspondingly smaller. Cable quality has to be increased to avoid loss of signal on both transmit and receive. Cable that is quite acceptable on HF bands tends to act like a big lossy dummy load on even 432 MHz, with not much power reaching the antenna, or getting from the antenna to the receiver.