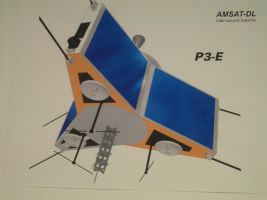 This satellite is approx.130cm diameter, 45cm height (not including antennas and engine). It has transponders operating in up to six amateur VHF/UHF/microwave bands. It is under development by AMSAT-DL (Germany).

One of the most exciting fields in amateur radio is the amateur satellite program. There are several small satellites orbiting the earth. These have been built by radio amateurs and are used by amateurs from around the world. AMSAT is the world-wide body which coordinates satellite construction, and lobbies for spare space on commercial launch vehicles. These satellites permit communications by morse code, voice, or packet radio, over large distances using line-of-sight frequencies in the VHF and UHF spectrum.

Low orbit satellites are the easiest to use. They can be used with low power and modest antennas. Examples of low orbit satellites include the Russian RS series and South Africa's Sunsat (SO-35) satellite. The sensitivity of this satellite was so good that amateurs operating from buses, trains and trams have been able to make contacts though it! Low earth orbit satellites have short pass-times (15 minutes typical) and are good for communication up to a few thousand kilometres. In contrast, other satellites require more power and bigger antennas, but allow global contacts to be made.

An example of one of the satellites operational in September 2008 is AMSAT OSCAR 51. It has nine modes of operation, with transponders capable of receiving signals transmitted by amateur radio operators on the 145.8, 1268.7 and 28.14 MHz amateur satellite bands and will retransmit signals heard on 435 or 2401 MHz.

The following is quoted from AMSAT's site:

AO-51 contains an FM repeater with both a 144 MHz and 1.2 GHz uplink and 435 MHz and 2.4 GHz downlinks. Additionally AO-51 contains a digital subsystem that transmits TLM on 70cm and provides complete PACSAT BBS that can be configured on both V and S band uplinks. There is also a 10 meter PSK uplink.

Experimenters can use their equipment to communicate with the satellite in various modes including V/U, L/S, HF/U, and others. AO-51 supports digital store-and-forward at speeds up to 76.8 kbps, and a contains a wideband SQRX Receiver. A current schedule of operation is kept up-to-date by the AO-51 Control Team.

For information on current amateur satellites and satellite communication, the AMSAT site is the most comprehensive. Other sites with information about satellite operations are: