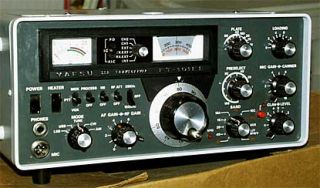 This radio was at one stage in the 70s the most popular and well known HF transceiver. With only 3 tubes in the transmitter section, it was mostly transistorised and worked on all HF bands from 80m through to 10m. There were several versions of the FT101 after the B, including the E and Z variants. At that time there was a lot of interference from an over-the-horizon HF radar system (woodpeckers) and many manufacturers tried to include noise blanking options to cut out the interference.

Other web resources about amateur radio

Radio amateurs have been quick to embrace the internet.  Many thousands of webpages now provide information about almost any aspect of amateur radio.

You can also go to the home page of Ringsurf which hosts the software and database driving the webrings. Once you are there, use the search facilities to find webrings related to any subjects you wish.

For newcomers to Amateur Radio in Australia, Peter Parker VK3YE maintains VK3YE's Gateway to Amateur Radio. This site for the newcomer to amateur radio, contains many in-depth articles on various facets of the hobby.  Information on becoming licensed, constructional projects, operating and equipment is also provided.

The Australian newsgroups are