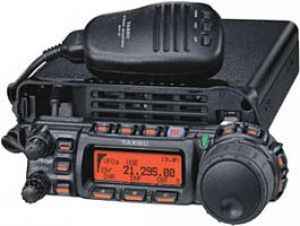 This radio falls between the FT817 portable 5w radio and the FT897 100/50w mobile radio. It has similar band coverage; all of HF, plus 6m, 2m and 70cm. The front panel is remotable. The radio is designed to be operated by one hand, almost by feel rather than by looking at the knobs and controls, hence the location of the buttons around the main tuning knob. the power level is 100w on HF and 6m, 50w on 2m and 20w on 70cm.

One of the most visible ways in which amateurs can provide public service, is through the Wireless Institute Civil Emergency Network (WICEN). WICEN is a group of trained amateur radio operators, which provides communications support for the emergency services during times of disaster.

Because WICEN operators are radio amateurs, the organisation has at its disposal more bandwidth, and a wider variety of frequencies, than any public safety agency, with the exception of the military. As such, WICEN can often provide a communications link between locations whose situation precludes the use of the communications equipment normally at the disposal of these agencies.

WICEN conducts many exercises throughout the year, by providing communications for community events such as fun runs and rallies. Aside from the immediate public service rendered by the communications provided, they also serve to train operators in message passing procedures. These exercises also give WICEN (and amateur radio in general) some much-needed PR exposure.

Some events in NSW which utilise WICEN communications in their running are the Sun-Herald City-to-Surf race in Sydney, the Hawkesbury Canoe Classic, and the annual VRA (volunteer rescue association) cave rescue exercise at Bungonia caves. In Victoria, amateurs provide communications support for a variety of sporting and public events, such as marathon races, canoe races and car rallies. Each year in Canberra, the WICEN group supports a number of car rallies major events in the Oceania rally circuit. Similar activities occur in all states of Australia.