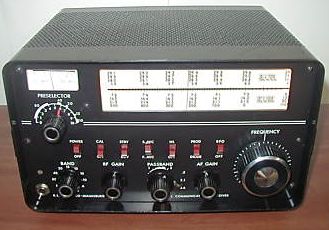 The 2B was an all tubed receiver built on a copper chassis, with a 50 kHz final IF. It had audio AGC and a hang characteristic designed to make CW and SSB signals easier to listen to, without background noises rising during gaps between characters or speech. It was a classic receiver and always attracts a lot of interest when one is advertised.

A good way to stay abreast of current amateur radio happenings by listening to your local weekly amateur radio news broadcast. The WIA conducts a networked new which is broadcast by clubs via 2m and 70cm repeaters and on some HF frequencies. The times vary in each area, but the majority of main broadcasts are made on Sunday mornings at 0900 or 0930 local time. In some states the broadcast is retransmitted on Sunday evenings and/or Monday evenings. The details of the broadcast times are published by the WIA website, under the heading "News and Events", then follow the links on the left for information about the broadcasts and the times and frequencies used.

News bulletins are often also available via other media such as web pages, e-mail, packet radio, audio off the internet. Broadcasts normally run for about 30 minutes and include items from clubs and special interest groups, advice of licence classes, contest information, propagation conditions, meeting notes, hamfest happenings, technical items and more. For this reason they are essential listening for both the newcomer and experienced ham.

Receiving amateur news services is very easy if you are in range of one of the 146 MHz FM repeaters used to transmit the news. Check the frequency of your nearest FM repeater. Llisteners in most major cities will be able to receive the broadcasts on a no-frills VHF/UHF scanner receiver. If you are outside those areas, choose an HF band to listen for the broadcast. You may find VK2WI's AM broadcast on 7.146 MHz will reach your area, or their rebroadcast on 1.845 using AM mode, on Sunday evenings. In Victoria, VK3BWI transmits on several HF frequencies and 3.615 may be a good choice as it should reach throughout Victoria at either 10:30 or 20:00 on Sunday.

In Queensland, South Australia, Western Australia, Tasmania and the Northern Territory, there are nominated broadcast frequencies which should enable you to hear the broadcast.

As a fallback option, you can download the weekly broadcast as an MP3 file from the WIA website and listen on your computer. And you can also subscribe to the MP3 version and get it sent to your email address each week.