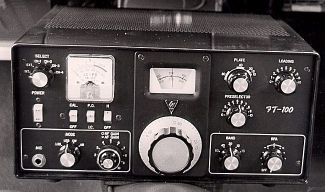 An early hybrid (valve and transistor) amateur transceiver. With about 100w output and all band coverage these radios were a huge leap in technology from the equipment used by most amateurs, some of whom went from WW2 surplus receivers and home made, one band AM transmitters, to equipment like this. It was an eye-opener and a band opener.

Proof that amateurs do more than talk into microphones can be found by tuning to 14.230 MHz - the international amateur slow scan television frequency. Here amateurs can often be heard swapping colour pictures to each other around the world. The pictures are not moving, but rather a series of stills - like a slide show. Some amateurs set their SSTV stations up as automatic repeaters (normally above 14.230 MHz) as a service to stations normally out of range.

Slow-scan television previously required expensive cameras and interface boxes. This is no longer the case. Like with many digital modes, anyone with a 16-bit soundcard and a reasonably modern computer can transmit and receive pictures with a minimum of extra equipment. Again software for SSTV (eg ChromaPix) is obtainable via the internet.