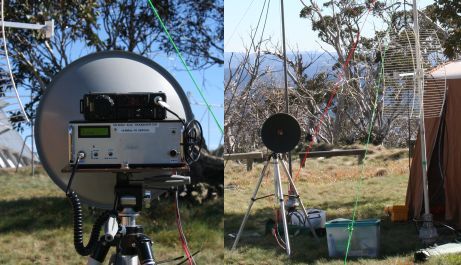 Microwave equipment in use on Mt Ginini

This equipment was designed and built by Dale Hughes VK1DSH. It was used in the VHF/UHF Field Day in November 2008 by VK1DA. There is an Icom IC202 SSB transceiver attached to the top of the transverter box. The transverter includes a CW beacon option and on SSB, adds a morse signal for the letter K when the microphone PTT is released. The LCD display indicates the current mode of the transverter and displays the input DC voltage.

On the right is a view of the 10 GHz equipment from the other side of the dish. The dish is about 30cm in diameter and on this frequency it has a gain of approx 30 dB.

Radio amateurs also successfully use these frequencies for interstate and earth-moon-earth amateur radio communications. The microwave bands, also known as the gigahertz bands, hold a special appeal to many experimentally-minded amateurs, and there is still much scope for experimentation. While commercially-available equipment for these bands is not common, a range of easily-built kits has recently come available that allow operation on these bands. Once again, the use of very high gain dish antennas means that only a small amount of power is needed to establish communication. As with the VHF/UHF bands, tropospheric ducting can allow thousands of kilometres to be spanned over large expanses water, such as the Great Australian Bight. Reflection of signals by rain showers is also a frequently used propagation mode on 10 GHz and above. This is however, limited to countries where there is rain. (Australia seems to be in a permanent drought).

There are several good Australian websites dealing with amateur microwaves, including those maintained by Robbie VK3EK, David VK5KK and Alan VK3XPD.

Other useful references are:

Microwave equipment is obtainable either in kit form, or as fully assembled equipment, from:

Also parts, cables, connectors and test gear are available in Australia from Alan Devlin VK3XPD. If you are looking for connectors, cables, attenuators, dishes, horns, waveguide, amplifiers, GPS-controlled or Oven Controlled oscillators, it's also worth checking on what's being sold on Ebay, in Australia, in the US and the UK.

Next: Communicating via Amateur Satellites