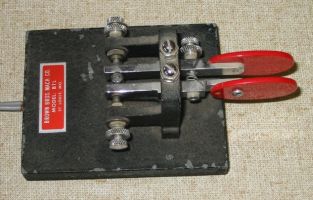 This Brown Bros paddle is one of many designs used by radio amateurs and others for sending morse code, using the "CW" mode.

Not many amateurs use plain "straight keys" as they are tiring for fast work.

The paddle itself is just two switches. By pushing one of the levers towards the other, one contact or the other is made. By convention, the thumb does the Dits (short elements) and the fingers do the Dahs (long elements).

The paddle is connected to a "keyer", a circuit containing logic that produces the short and long elements of morse code, but ensuring that the elements are correctly spaced apart. Some keyer circuits have letter spacing and some even have word spacing. The speed can be adjusted.

And no, this one is not for sale. I've owned it since about 1970 and it still works just fine.

It is no longer necessary to pass an exam in morse code for an Amateur Radio licence in Australia.

However morse is still used by amateurs and there are nightly Morse Practice Broadcasts (normally transmitted on 80 and/or 2 metres) transmitted especially for those learning the code. In addition, some cities have 24 hour continuous Morse practice beacons that you can tune into at any time. Listen on 3.699 MHz to hear VK2WI transmitting practice morse at a range of speeds. Also see the KA7NOC website under the CW link.

How the morse code requirement was dropped

There was a growing recognition during the 1990s that few prospective radio amateurs accepted the validity of the morse proficiency requirement for HF licences. Some or all WIA Divisions conducted a survey of members in late 1995 to see whether their members agreed with the morse requirement. The morse code test was widely seen as out of step with today's technology and the interests of today's newcomers to the hobby. There were movements afoot in New Zealand, Europe and the USA during the next few years, culminating in an announcement by the American radio administration (FCC), that from April 2000, the morse speed requirement would be reduced to 5 wpm. Many other countries followed suit, including Australia and New Zealand and many European countries. More details were published by the WIA.

The morse test requirement was finally removed as a treaty requirement by a World Administrative Radio Conference in 2003. The morse test was left to individual countries to apply if they wished. In Australia, the ACMA agreed to remove the requirement for morse tests as of 1 January 2004.

This is nevertheless not the death of morse code as an active mode on the amateur bands. Morse is too useful a mode for it to be dropped by amateur radio. Using morse code an amateur can bypass language differences and overcome interference and crowded band conditions that would make communications impossible on any other mode.

Morse will continue to be the most fundamental of the digital modes, for use under the worst possible radio conditions such as Earth-Moon-Earth amateur communications. It will also continue to be used for low power communications (QRP), where the simplest transmitters simply turn a single radio signal on and off and there is no need for the complexities of voice modulators.