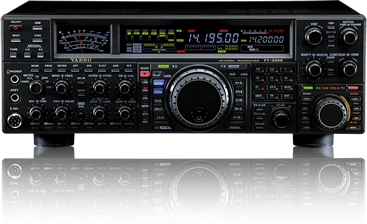 This transceiver offers the keen amateur operator either 100w or 200w on the HF bands, with 100w on 6m. Equipped with Digital signal processing and as can be seen a wide range of adjustments are possible while listening for or talking with DX stations.

DX means "long distance" and naturally the further away the other station is, the greater the achievement. Some countries are rarely heard on air (usually because they have few amateurs), and snaring the "rare DX" is the holy grail for many amateurs.

Other countries don't even have an amateur radio service, and often a group of amateurs will mount a "DXpedition" to that country giving amateurs from around the world to an opportunity to work a country that they normally would never get the chance to work.  News of DXpeditions is provided in magazines such as Amateur Radio, CQ and QST.

The Internet is an excellent source of up to the minute information for the DXer.  'DX clusters' operating via internet or packet radio, can provide early warning of the appearance of a particularly sought-after station.   Other examples of the internet providing assistance to DXers is the provision of online propagation information through the Ionospheric Prediction Service  and the publication of DX station logs, so stations can confirm that they have been worked by a DX station before sending off their QSL card.

The Oceania DX Group is a Australian based DX-focussed club with a mailing list and regular bulletins of news to members and subscribers. The club conducts expeditions to rare and wanted locations. The Group can be joined via Yahoo Groups.